You can’t spell video without YouTube. As part of our social video series, we explore the power of YouTube video marketing.

YouTube has lead the way for video content since it launched in 2005 and no one touches them for the sheer number of hours spent watching video content. Facebook is steadily snapping at their heels, and it seems inevitable that a battle for video content supremacy is on the horizon. For now, however, if you want your video to be watched, it has to be on YouTube.

YouTube is not just dominating other websites; it is also drawing people away from television. In 2015, 18-to 49-year olds spent 4% less time watching TV, and YouTube viewing went up 74% in the same period. The trend is clearly in favour of people watching online and increasingly on mobile (more than 50% of US YouTube traffic is from mobile devices) as battery life improves and screen size increases. 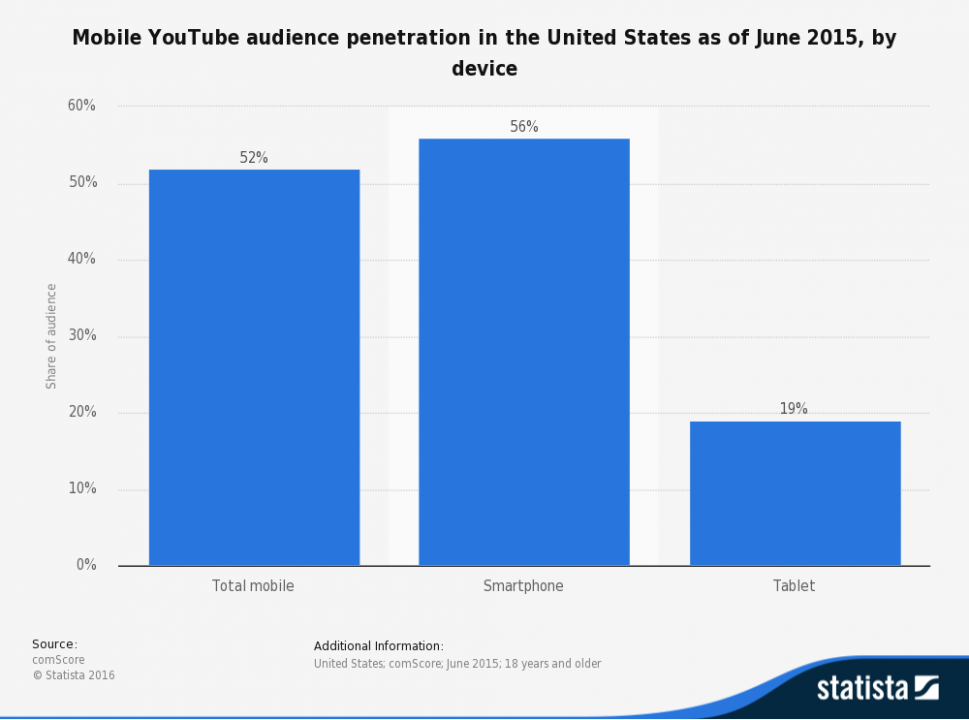 YouTube is the third-most-visited website in the world. That should be reason enough to make it central to your video marketing strategy. A few more mind-bending facts about YouTube’s reach:

YouTube also has you covered if it’s engagement you’re after, particularly if your content is targeted at millennials. YouTube conducted a study that found by simply hosting your TV commercial on YouTube you increase your ability to reach millennials by up to 46%. That is without incurring any additional costs. However, if you want your YouTube content to get maximum engagement and traction, we recommend repurposing it for the channel. You can also put some budget behind it to get even more exposure (see marketing options, above).

Shelf life is also shown to be impressive on YouTube when compared to other platforms. For example, putting your video content on Facebook has its own merits, but content can be quickly swallowed up by the ever-churning newsfeed, or overlooked by Facebook’s algorithm altogether if organic content. YouTube, on the other hand, surfaces video in their powerful search results (they’re the second largest search engine in the world), as well as via paid promotion, such as TrueView.

As long as you have the time, skills or resources, you can set-up tracking to see a range of metrics, such as watch time, engagement and subscribers gained or lost. Without setting up tracking, you can see views, comments, likes and dislikes.

Unlike Facebook, where you have to achieve the nearly impossible task of grabbing someone’s attention while they scroll through their feed at lightning pace, on YouTube, you have the luxury of being able to take a bit more time to let your content unfold. That doesn’t mean you don’t have to modify your content for the platform, though.

It is tempting to just post your existing videos onto YouTube, such as TVC’s and corporate video, but we still highly recommend repurposing them specifically for the channel.

Here is some inspiration to get you started

These social videos were created by Genero’s network of creative filmmakers and are some great examples of long-form video marketing that works so well on YouTube.

Discover more about social video with our Facebook video guide.

Get in touch if you would like to speak to Genero about creating video content for your product, brand, service or band.